3 in 4 support medicinal cannabis use in Ireland

Your Opinions is our community-based insight engine that allows us to check in with a large nationally representative panel of people when we need to provide some quick clarity to our clients or when we get curious.

In this case we asked 1,010 people across Ireland to tell us what they thought about the potential legalisation of cannabis (among other things) in Ireland in the wake of the approval of two medicinal cannabis products on Monday.  Here’s a little bit of what they told us.

As one might anticipate, younger age groups are somewhat more liberal in their views regarding recreational use, but no constituent group overall are in favour of free recreational use
While supporters of certain political parties, such as the Green Party, Sinn Fein and Labour favour a more libertarian regime it is not a majority stance for any of the party’s support bases. 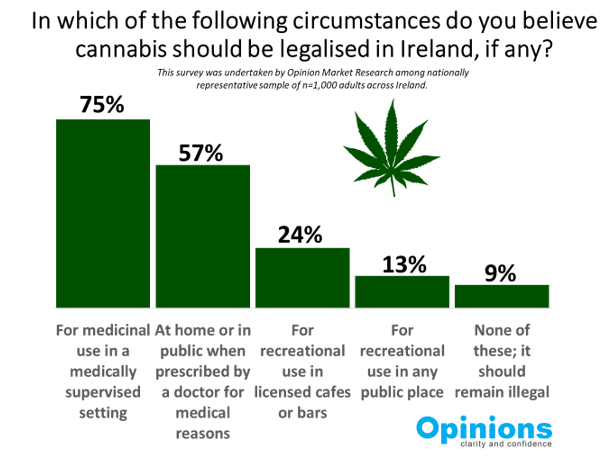 So, only 1 in 10 Irish people feel that it should be illegal in all circumstances, with a clear majority in favour of its medicinal use.  However, it seems it will be some time before a majority endorse the use of cannabis as a recreational option.

Ireland has its say….